AN ARROGANT VAMPIRE IS CURSED TO LOVE AND LOSE THE SAME HUMAN FOR ALL ETERNITY… WILL THE MONSTER FIND REDEMPTION OR BE FOREVER DOOMED?

The audience/patrons use industrial freight elevators to descend stories ‘underground’ to the CORPS DU SANG – an alternative dance club where the vampires play.  Exposed brick and industrial steel galleries, pounding club music and LCD monitors decorate this Goth-meets-Grunge club. Sweat-soaked dancers writhe to blood-pounding music on a crowded dance floor.  Tufted velvet banquettes and chaises, steel cafe tables and chairs litter the space.  Humans gamble with their fate as they willingly mingle with the undead.

ACT I: THE CORPS DU SANG

The Ringmaster and owner of the club, surveys the clientele ensuring that neither human nor vampire bites off more than they can chew.  Seated at the concrete and mahogany bar is the preternaturally melancholic Vampire – best friend to the Ringmaster. Lounging on stairs and catwalks, the Vampire Chorus invites us to (Come Out and Play – rock / dance).  The Ringmaster & Vampire join in – introducing club patrons to the intricate lives of the undead. A young Human appears on the catwalk. The Vampire is captivated; it is obvious that the two have a past ( Bring About the End intro). The modern-day club transforms and we are transported back in time to the Vampire and Human’s first meeting in Ancient Greece ( Temple Dance).

SETTING:  THE TEMPLE OF THE DEITY OF DAY & LIGHT, ANCIENT GREECE 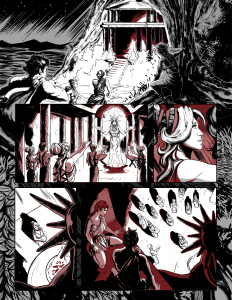 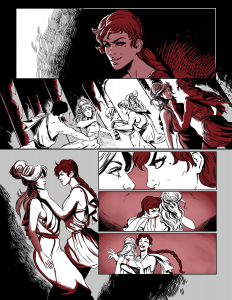 The club fades and becomes a Grecian temple. In Grecian robes, human acolytes pledge their lives to the Deity of Day and Light. Incense fills the air as candles are lit by the acolytes. A statue of the Deity adorns the centre of the temple, all acolytes make offerings to it.

Surrounding the temple, indolent vampires watch the ritual and lie in wait. The Vampire regards the scene with impatience as the Ringmaster shares an intimate embrace with their Lover. Though the Lover is very much infatuated with the Ringmaster, those feelings do not seem to be reciprocated.

As dusk turns to night, the vampires seduce each human servant away. One helpless Human is hunted and tormented by several vampires ( Acolyte’s Seduction).  As the Lover looks on, The Vampire and Ringmaster debate the Human’s attributes and decide they are worth keeping. Appearing as a ‘savior,’ the Vampire seduces and transforms the Human into one of their own kind. The Vampire drinks from the Human before forcing them to partake of vampire blood. In the Vampire’s thrall, the Human watches as their fellow acolytes are killed or transformed (Melée). 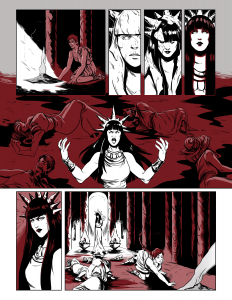 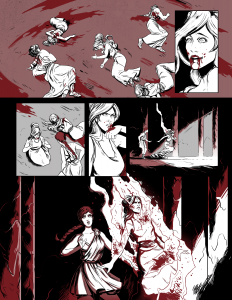 As the acolytes are fed upon and discarded, the Human awakens – transformed. They can barely speak in the midst of the carnage. As the other vampires seek shelter from the coming dawn, the Human and the Vampire remain in the defiled temple surrounded by corpses. A horrified Human decides to end their anguish ( No New Dawn).  The Vampire watches, stunned, as the Human steps out of the temple’s shelter into the dawn’s burning light. The Human’s skin begins to smoke before bursting into flame. As the Human’s body turns to ash, the statue of the Deity comes to life. The Deity discovers the destruction the vampires have wrought. Picking up a handful of the Human’s ashes, the enraged Deity curses the Vampire to an eternity of loving and losing the Human ( You’ll Get What’s Coming to You).

Through movement and voice we are transported forward in time. Passing through many different eras, we watch as the Deity’s curse plays out. The Vampire and the reincarnated Human come together and are torn apart over and over again. 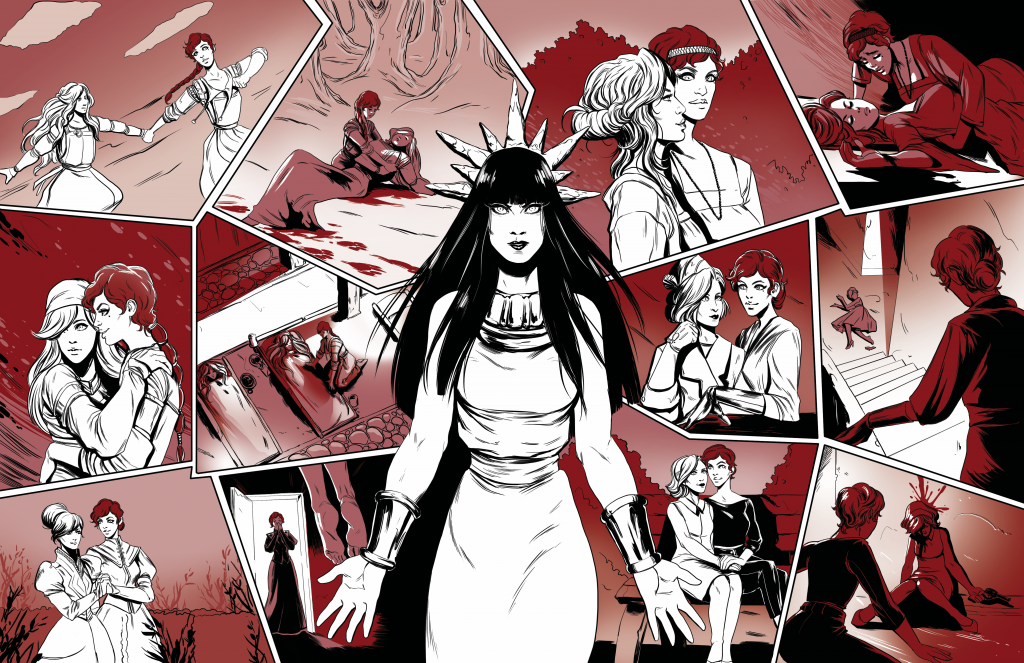 Back in the Ringmaster’s present-day club, the Vampire steels against fate when the reincarnated Human appears once more (Bring About the End – Male / Female). The epitome of cool and sarcasm, the Ringmaster attempts to shake the Vampire out of their cursed human addiction ( Get Over It).  Helping the cycle along once more, the Deity appears and pushes the oblivious Human in the direction of the Vampire ( Look At Him). The determined Human approaches the Vampire on the crowded dance floor but is quickly rebuffed ( I Ain’t No Romeo). The Vampire cruelly abandons the Human, taking several others into intimate embraces.

Climbing the stairs to the catwalk, the Human continues to pine for the Vampire. Unnoticed by all, the Deity is never far away – always manipulating the action. The Ringmaster’s Lover appears at the club’s entrance. Sparks fly as the two play another round of “Come Here, Go Away” – a game they’ve been enjoying for centuries  ( You’re Not So Tough). The Human heads into the night air on the club’s rooftop, and with a little help from the Deity, vows to gain the Vampire’s affections (Falling). The entire cast of bar patrons, vampires, and mortals then fight through their emotions (  Clutching At My Dream).

The night winds down at THE CORPS DU SANG. As tables are cleared and floors washed of blood and sweat, the Vampire Chorus shares the true nature of their fabulous lives ( Our Dusk is Dawn). As the vampires disperse, the Ringmaster counts the evening’s take at the bar, while fighting feelings for the Lover ( Losing My Grip).

The Human follows the Vampire and Deity to the rooftop, and overhears an emotional confrontation between the two ( What Do You Know?).  Appalled to discover the truth of their destiny, the Human in turn confronts the Deity ( What Am I?). The horrified Human fights against this new knowledge ( Unknown).

Meanwhile, the Lover covertly watches the Ringmaster at the bar, desperate to deny true emotion ( Status Quo).  Having had time to reflect upon the argument with the vengeful Deity, the Human resolves to take control of fate. Determined to choose independence, the Human approaches the Vampire in the club and begs for the opportunity to defy the Deity;  to embrace an undead existence and abandon humanity altogether ( Do This For Me).  The Vampire and Human share a lovers’ embrace before falling asleep in each other’s arms without sharing blood.

On the rooftop, in the pre-dawn air, the Deity struggles with conviction having witnessed the Human’s agonized struggle ( Doubt). In the midst of yet another argument, the Lover and the Ringmaster beat their dead horse of a relationship ( Next Time Around). Afterwards the pair can’t resist one more kick at the proverbial can and revert back to their baser instincts.

As the Human dozes, the Vampire makes a decision. Acknowledging that a sacrifice must be made to save the Human, the Vampire heads to the rooftop to greet the destructive dawn (My Eyes Are Open – Male / Female). ). Somehow sensing what is about to happen, the Human and Ringmaster rush to the rooftop from opposite directions, just as the Vampire steps into the deadly sunlight. The Lover follows closely behind, restraining the Ringmaster in the shadow of a doorway. The Human rushes towards the Vampire, but is too late; the sun has done its damage and the Vampire explodes into ash. A heartbroken Human desperately sifts through the remains, nearly hysterical. Having witnessed the Vampire’s violent end, the Ringmaster is now helpless – and collapses into the Lover’s waiting arms. As the Human weeps over the Vampire’s ashes, the Deity appears and breaks the curse granting the pair one last mortal lifetime together ( Deus Ex Machina), allowing the pair their happy ending.

The morning breeze gently gathers up the Vampire’s ashes. The soot re-materializes into human form and the lovers embrace. In the sunlight together, as humans, they marvel at their newfound life ( Enough for Us). Vampires lurk in the safety of the club; humans and deity bask in the light of a new dawn. Each character faces their future ( Hope Springs Eternal).